Today I’ll be giving a quick run-down on how I like to apply TrickTape and use it to not only repair holes in my shoe uppers, but also prevent damage and extend the overall life of my shoes.

The general idea behind TrickTape is straight-forward…skate shoes get damaged quickly, to the point that they’re pretty much un-skateable within a few weeks, and if you’re like me, you’d rather not constantly be buying new shoes because that adds up to a lot of money over time.

If you’re able to add some extra life to your shoes, even if it’s a couple weeks, rather than buy a new pair, over the course of let’s say a year, that’s 2-3 pairs of shoes fewer that you’ve had to buy, and close to a couple hundred extra bucks in your pocket.

So keep that in mind – every additional day skated using TrickTape is saving you money in the long run.

Anyhow, let’s get to it! Here’s what my shoes look like after 3-4 weeks of skating. In order to maximize my shoe life, I’ll skate a new pair until holes juuuust start to appear but there still isn’t what I’d call major damage to the shoes. I’m fine with my shoes getting a little ripped up at first without any patches stuck on yet, because it allows me to break them in and really see what areas are getting the most roughed up.

That said, I’ve noticed that once a hole starts to rip, things start to unravel pretty quick so I’ll make sure to patch it before things start to get real bad – as can be seen with the hole on the ollie side.

I also get a lot of wear up around the kickflip area, so even though there aren’t any holes yet, I’ll take a patch, cut it in half vertically, and stick them right around where the rubber has been worn through as a way to reinforce the area – preventing any holes from ripping in the first place.

And that’s it! For best results, I’ll take an old toothbrush and (make sure it’s dry) scrub down the areas where I’m about to apply the patches, removing any dirt/dust/sand that could get in between the adhesive and shoe upper. I also like to apply the patches at night, giving them a good bit of time to really bond to the shoe before skating again in the morning (I wouldn’t say either are 100% necessary, but if you’ve got an old toothbrush on hand and have time to let the patches bond, give it a go).

Thanks for reading! This is what works best for me, mess around with it and see how you best apply TrickTape based on your style of skating!

Stay tuned…I’ll be writing an update in a week or two to show how the patches have held up after skating!! 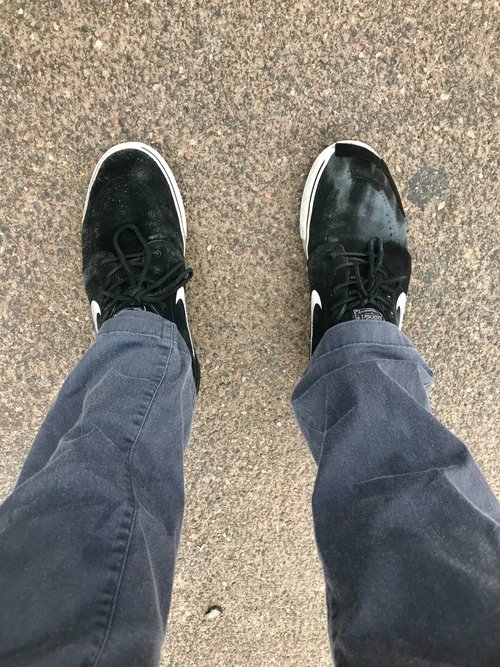